“ANYONE CAN COME AND PLAY”

“ANYONE CAN
COME AND PLAY”

Raphael Park was donated to the public by Lord Raphael in 1905. In the 1930s the park’s pond, known as Spoon or Keyhole Pond, was drained and 12 hard tennis courts were built. The courts were run by Havering Council until 1996 when they were put out to tender.

Since 1997, Hammond Tennis Management has run the courts. Raphael Park Tennis Club was formed in 2001 and became fully LTA affiliated in 2005.

Nurtured by David Hammond, known locally as ‘The Tennis Man’, a friendly, affordable and social club has grown around the courts.

​The club’s philosophy is that “anyone can come along and play”.

No prior booking is necessary.

We have yet to not have a free court available!

Open to everyone of a standard able to join in.

All year round (except from the evening session, cancelled Oct to April).

A coach is always in attendance.

For other competitive sessions, such as club championships, please join our membership.

PLEASE NOTE: We will give 30 minutes of individual coaching if there is only one attendee

Book your one to one coaching now by contacting your preferred coach below. 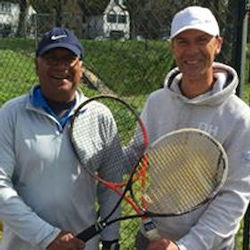 How do I book to play?

There are no bookings for courts as we are yet to not have a court available.

Is their court etiquette?

Are there any organised events?

Yes, please check our website news section for all the latest updates.

What kit do I need?

You can wear what is most comfortable to play an active sport.

Light clothing is recommended for example T-Shirt and Shorts.

Tennis trainers are recommended due to their ankle support and non-marking soles but any trainers are allowed.

Are there facilities on site?

We have our own private toilets within Raphael Park.

There is also a fully stocked cafe located 2min walk within Raphael Park.

Is there parking available?

It is free parking, anytime.

You may park anywhere along “Park Way”.

You can find the latest password written on the Raphael Park Tennis Club notice board.

If you need any help at all.